The new CD is coming along quite well I think. I have a good 20 songs or so recorded, from which I'll choose the best 10-12. My last CD, Into The Blue, had 14 songs. They're good songs, but I want the next CD to be "tighter", for lack of a better term.

So the new songs are all recorded and mixed, for the most part. As always, I played all the instruments save for saxophone which was played by Dennis Landeen. Next is the mastering phase. Mastering, for those of you who don't know, is the process of adding EQ, compression, and limiting to a track to bring out the best sonically. Yesterday I spent the day in the studio mastering "Vibration", as well as "New Face On The World" and "Son Or Daughter". "Vibration is the only one I finished, as my ears were getting fatigued after a while.

I had hoped to have the CD wrapped up by now, but it hasn't worked out that way. No worries. Better to take the time to do it right.

The next thing I have to do is put a link to this blog on my website, so there might be some chance of someone reading it!
Posted by Jim Pellinger at 11:17 AM 2 comments: 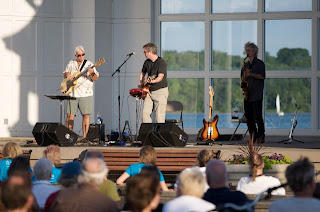 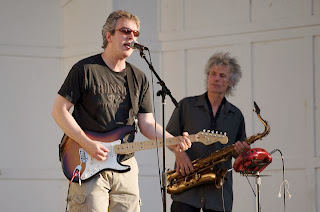 Well it was a good show I think. I had a few friends show up, Jeff Pedersen (who took some great photos), John Warner and his wife Patty, Sue Strand and my wife Monica. Some members of the mailing list were there as well. I know this because one person filled out a mailing list request card, requesting to be removed from the list! He said he could follow my shows on my website. That was a first, I must say. But no problem, he's off. I have often wondered about the people I send postcards to, whether or not they read the cards and come to the shows. Every now and then someone will stop by the stage after a show and tell me they are on the mailing list, so that's nice to know. But I'm sure there are lots of people who don't make the shows. Presumably they filled out a card at a show, wanting to be on the mailing list. A few did tonight as well.

But I digress. It was a good sized crowd, enjoying a fine summer evening. I really couldn't have gotten better weather. Bruce and Dennis did a fantastic job, as always.

But there's one thing I'm going to start doing differently. I think I'm going to bag the drum tracks coming from the looping pedal. The justification always was that it is me playing the drums on those loops--they are drum tracks from the recording sessions for the songs. And today plenty of bands use loops onstage. And, lacking a drummer, I thought it lent a good rendition of the recorded version of the songs. But there's just too much chance for error, and no chance at all to stretch out and improvise. Plus, there's a "old skool" streak in me that says it's just a little too close to bogus.

I should have known; last night when Bruce and I were rehearsing I often thought the straight no-loops versions we were practicing sounded pretty good. I should've gone with my instincts. Oh well, you experiment and you learn. No big deal.

Next show--July 7 at Father Hennepin Bluff Park in Minneapolis.
Posted by Jim Pellinger at 11:26 PM No comments:

Tuesday June 24 I'll be at Lake Harriet Bandshell, on the shores of beautiful Lake Harriet in South Minneapolis.  Joining me (so far anyway) will be Dennis Landeen on sax and Bruce Thompson on bass.  Showtime is 7:30 PM, and I'm hoping for a typical beautiful summer evening weather-wise.

I've been a solo artist for a long time.  A long, long time.  Sure, I've been in a few bands.  The little unnamed sixth grade rock combo that got laughed off the stage at it's first and only gig.  Mesa, my CSN-style folky acoustic trio.  Innocence (I didn't come up with that name), a band I pulled together in college that I quit before we ever had a gig.  Jim Pellinger and the Folkups, which played a few club gigs around Minneapolis/St. Paul before it disintegrated.  And one unnamed band that played it's first, last, and only gig at the Metrodome in Minneapolis.  But mostly through all that time, I've been a solo act.  Why is that?
Well, in some ways it's just easier.  This point was driven home today when I got a call from my sax player, explaining that he couldn't make the gig tomorrow because he had a recording session booked.  No worries.  I can do the gig by myself.  I've done it thousands of times.  It's no big deal.  But now imagine that you've got three or four or more other people to depend on, and their schedules and lives, etc. to take into account.  And it's not only the shows, it's the rehearsals too.  It can be very difficult to arrange a simple practice.  (I really don't like practicing all that much.  I can never seem to remember the lyrics to my own songs after I've sung them once.  The second time through I get lost.)  And I'm not even going to get started on everything else that can complicate a band relationship.  I don't have the time to get into all that!
But I am comfortable with the little combo that I've developed.  Just me, and Dennis on sax, and now Bruce on bass.  I like the flexibility of it.  I book a show.  I ask the guys if they want to play.  If they do, great.  If they don't, it's a solo show.  Somewhere down the line I'd like to add a drummer to the mix.  Will I find one?  Who knows?  It would be great to find a good drummer who fits what I do.  Till then, there's always the looping pedal.
Of course there are advantages to being in a band.  Nobody calls you a folksinger when you're in a band.  That seems to happen when you show up alone with an acoustic guitar, no matter what kind of music you are playing.  Not that there's anything wrong with being a "folksinger".  I just don't think it covers what I do.
And you have a wider choice of venues to play at with a band, venues that draw bigger crowds.  And there's someone to have a drink with during break.  I'm sure there are lots of other advantages I'm not thinking of.
But tomorrow, I'm going out to do a solo show.
Posted by Jim Pellinger at 5:35 PM 2 comments:

Welcome, and why a blog anyway?

First off, I'd like to say welcome to the Door To Door Music Blog.  I'm glad you dropped by.  I'm sure right at this moment I am typing this for myself, but maybe it won't always be that way.
Second, a little bit about the title.  Door To Door Music is the name of my artist-owned label.  And it's a bit of a descriptive title, illustrating the way indy musicians like myself operate--door to door, gig by gig, person by person.  Hell, it's the way major label artists operate as well, but they have the advantage of being financed by the label, and the disadvantage of having to pay it all back.  But I digress.
And why a blog?  Damned if I know.
Posted by Jim Pellinger at 8:30 PM No comments: