Let me tell you, it's cold here in Minneapolis. We are in the season of the "Polar Vortex", and my last show was not too well attended because, well, it was just too damn cold out! The hi was like -5 degrees F. How could I blame anyone for wanting to stay in? Even I almost would've rather not had to go out anywhere.

So it was with that in mind and still in the icy grip of winter that I loaded up my gear and drove to last night's show at the Riverview Cafe & Wine Bar in Minneapolis. I call the Riverview "Home Base", because it is two blocks from my house. Call me lazy, but it's one of my favorite places to play for that reason. Plus, everybody knows me there--the owners, the staff, everyone. For that reason I avoid the usual BS that sometimes accompanies booking a show. I text Dave my open dates for the next few months, and he texts back which dates he wants me to play. It's just too damn easy, and I usually opt for the path of least resistance.

Anyway, as I was traveling the two blocks to the show and, recalling the last show there, I was really wondering how this one was going to turn out. Not just because of the weather, but also because over the past year Dave has run into some zoning issues with the city of Minneapolis, the result of which he wasn't able to have music at the Riv. Now over the years Dave has built up a reputation for the Riverview as a music destination. I've played there since the place first opened, and let me tell you it took a while to get that reputation. And you can feel it. There's a distinct "before and after" when it comes to the music destination rep. The difference is, with a reputation for having live music people who want to hear music show up and they are much easier to play for. Before, people would look up from what they were doing, see a musician, and go back to what they were doing. It was a tough crowd. And now with the zoning problem, those days seemed to be coming back. At least it seemed like that at my last show there. And it was cold.

So I got to the Riv and set my gear up. I was traveling light since the lock on my trunk on my '97 Bonneville is broken and I have to load everything in the back seat. So I only brought one guitar--left the 12 string at home. Too often I'll bring the 12 and maybe and electric as well. It looks cool, I'm surrounded by guitars onstage. But then I'll play most of the show with the acoustic 6 string and not touch the 12 till late in the show when I think "I better play it since I brought it." But as it happened I was traveling a bit too light. I was all set up with 20 minutes to go till show time when I realized I'd forgotten my capo. Here's where the beauty of playing 2 blocks from home really comes into play, because I was able to walk home and get the capo and be back in time for the show.

So I got back with the capo and it was show time. Paul and Laurie were there, they're on my mailing list, so I knew I was going to have to play Townes Van Zandt's "Pancho & Lefty". But not right away. I was going to make them ait a little bit. My buddy PK showed up. He's also on the list. Nice when that works out. As for the rest of the house, I was pleased to see that it was full--all the seats taken. And even better, they were there to listen.

I kicked it off with a song I wrote when my daughter was born, "New Face On The World". That went over well, and since I was in drop D tuning I stuck with it for the next tune, playing Steely Dan's "Do It Again". I play that one well, but it didn't get as big a reaction as New Face, so I took that as an indication that I should play more original material. Which I was more than happy to do as I launched into "Son Or Daughter", followed by "Your Favorite Song".

What I did after that I really don't remember. I have a set list that I only loosely follow. It's more of a suggestion list. Long story longer, it was a great show, the audience was great, my PA sounded great. The highlight might have been when a little 4 year old girl came up and asked me to play "Old MacDonald". I said sure, but only if she would play the egg shaker with me. So she did. And she was good! She started when I started, stopped when I stopped, and kept a pretty good beat. She was as good as some drummers I've worked with. 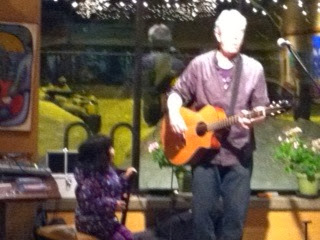 I asked her if she knew any Bob Dylan, and she nodded "yes". So we played "It's All Over Now Baby Blue". She stayed up there for another 10 songs or so--some of mine, some covers. She really nailed the "na na na na na na nas" on "Hey Jude", which she requested. Four years old! Gives you hope for the future. The crowd loved her. And that's what it's all about, right?

Now, what was it I was worried about?

Posted by Jim Pellinger at 10:53 PM No comments: