A month ago I went to Folk Alliance International, and at the time I thought I would blog about it while I was there. What a silly idea that was! The fact of the matter is there simply isn't time as there is so much going on.  Stopping to blog just wasn't going to happen.
But now that I'm settled back home I will take a shot at it, with the aim that maybe it will help someone who is pondering making the trip. I know I was combing the web looking for anything that would give me an idea of what FAI is all about.
So here is a typical day at FAI. Music camp sessions start at 10 am, and features workshops on a variety of playing styles on various instruments, songwriting, performing techniques, etc.  From 1 pm to 5 pm there are panel discussions dedicated to various music business topics such as publishing, promotion, touring, etc. From 6:15 to about 10:30pm there are official showcases, a different act every half hour in 10 ballrooms of the Westin Hotel. And at 10:30 pm everyone moves up to floors  5, 6, and 7 for "private showcases", roughly a different act every half hour in every room on three floors. This goes until 3am. Do the math, that's a lot of music.
And the next day it starts all over again. From Wednesday thru Saturday.
Along the way there are lots of opportunities to mingle, meet other artists, industry people, radio DJs, and venue representatives. In fact the mingling is a major reason for the conference, so everyone is super approachable. I met a lot of really great people there, and I wasn't even trying.
And the music--I can't tell you how great the music was. Just fantastic.
To sum it up--if you're a musician or band that plays music that could be loosely described as "folk", you should seriously consider going. I perform solo, vocals and guitar, and while I don't consider my music "folk" I can see why people may lump me into that category.  People like labels, and that's the label they put on you when they see you alone with a guitar. But I don't think a folk purist would consider my music folk. So I was wondering if I would fit.  I soon came to the conclusion that this is exactly where I do fit.
I left Kansas City invigorated, inspired, a bit tired, and already planning for next year. 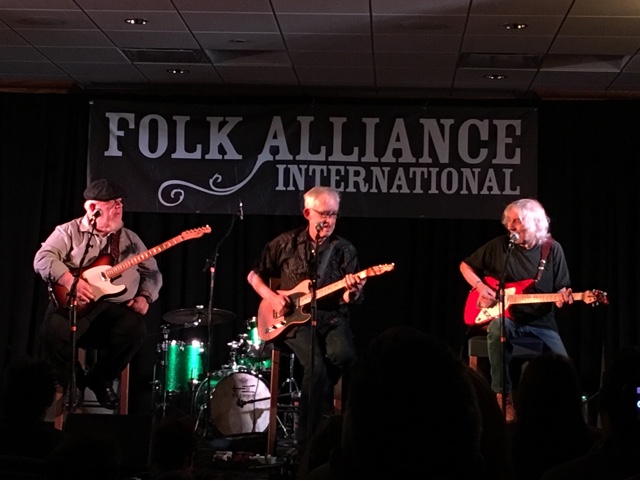 Posted by Jim Pellinger at 7:47 PM No comments: